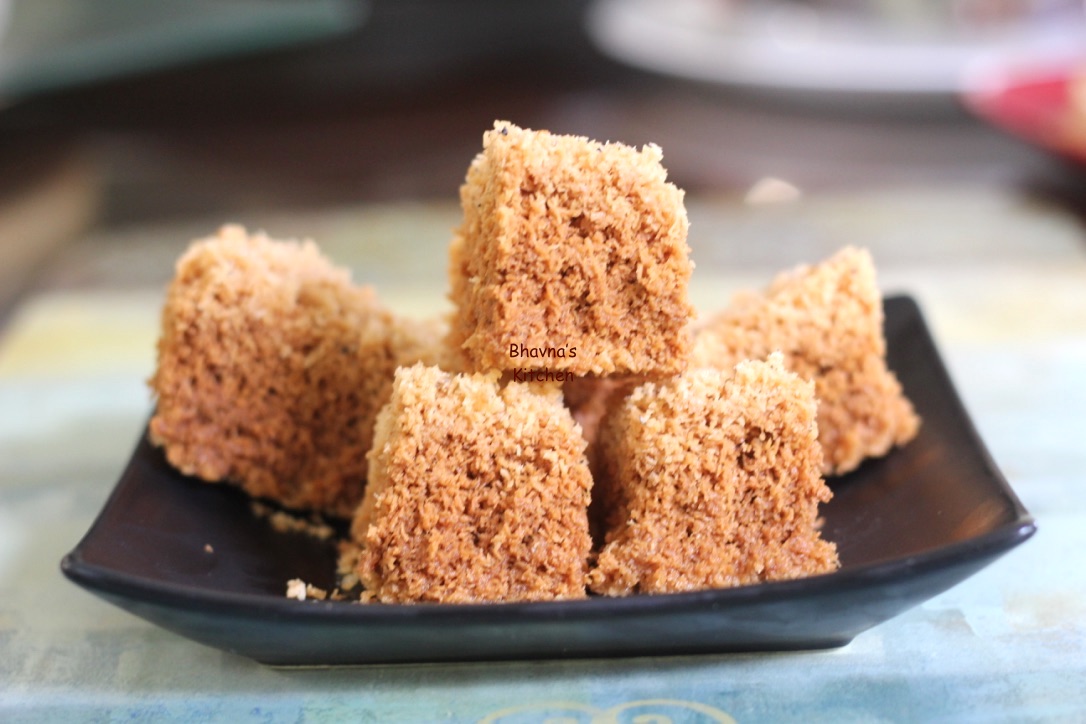 The easiest Mysore Pak I ever made!
For those who don’t know Mysore pak, Mysore pak is an Indian sweet prepared in ghee from Karnataka, India. It originated in Mysore. It is made of generous amounts of ghee, sugar, gram flour, and often cardamom. The texture of this sweet is similar to fudge. Now, usually Mysore pak made with Gram flour (Besan) is popular and well known but these days Mysore Pak can be made with other ingredients such as Badam (Almond), Nariyel(Coconut), Mumphali(Peanut) and so on.
Below is the step by step video instructions to make Coconut Mysore pak.

Mysore pak was first prepared in the kitchens of the Mysore Palace during the regime of Krishna Raja Wadiyar IV, by a palace cook named Kakasura Madappa. Madappa made a concoction of gram flour, ghee and sugar. When asked its name, Madappa had nothing in mind, simply called it the ‘Mysuru pak’. Pak (or paka, more precisely) in kannada means sweet. It is traditionally served in weddings and other festivals of southern India, and is very popular in baby showers as well.
Paaka shastra (short paka) in Kannada means ‘cooking procedure’ or ‘cooking techniques’. Also paka in Kannada refers to sticky sugar syrup obtained by simmering sugar with equal amount of water; specifically for Mysore Pak, the simple syrup is heated to the soft ball stage. The syrup is used as the primary sweetening agent in various Indian sweet dishes like Jalebi, Badam puri, Mysore pak and others. The syrup is flavored with various spice essences like cardamom, rose, honey etc. Paka syrup preparation is a skilled art mastered by few cooks, some of whom keep their methods secret.
I think ingredients like badam and coconut were introduced to prepare this delicacy to offer God as a Parasadum or Prasad. This sweet can be eaten during Vrata or Upvas (Fasting).
To prepare Badma Mysore pak, you will need following ingredients:
2 cups Desiccated coconut
2 cups Ghee (Clarified Butter)
3/4-1 cup sugar
4oz (1/2 cup) Cream or fat milk
You can then add flavor of Cardamom if desired.
To prepare the Mysore Pak, one can follow two ways of making it. Traditionally, sugar syrup is of 1 string is made using water and sugar. Then roasted Besan is added and finally warm ghee is added at intervals. But That process is so difficult for me so I now mix all ingredients straight into the pan, cook till ghee separates and pour into perforated tray to remove access ghee. Cut while still the mixture is soft and let it cool completely till hard.

These delicacy can be stored at room temperature in a dry cool place for up to a month.

Hello! I am Bhavna a mother of two. Born and raised in India but reside in the USA at present. I love to cook and share my family recipes with others.
View all posts by Bhavna →