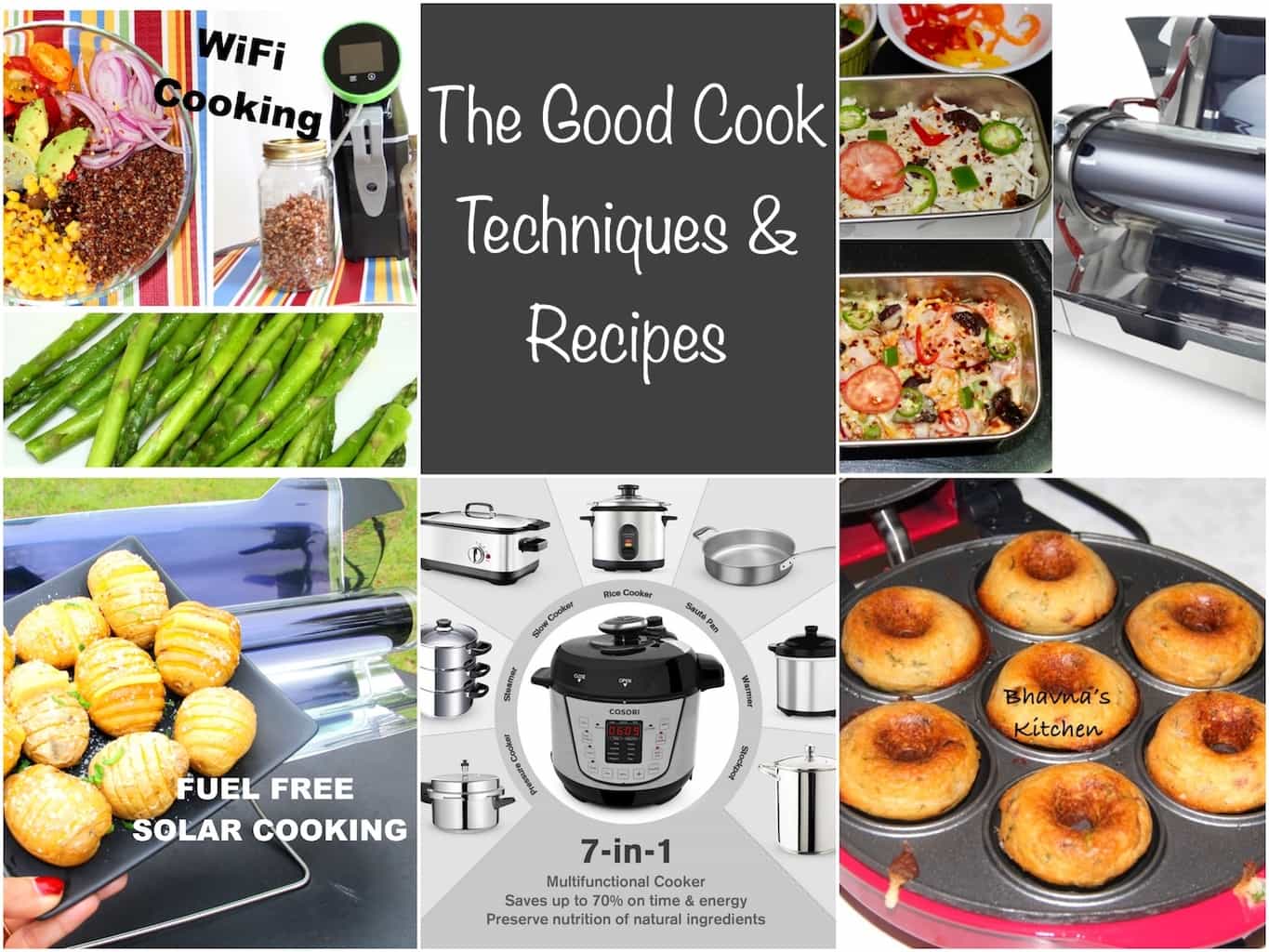 Why do we need to know many cooking techinques? Well, the more you know the better your cooking experience will be. Sometimes, you can even turn disasters into new recipe if you know some quick fixing by using some good cooking techniques.

In the world of cooking we all know probably the techniques listed below. You might have already been using or you mihgt have heard of it but with the new technology innovated almost every minute, cooking has become more intresting and fun. In our everyday cooking, we use cooking techniques like baking, roasting, steaming, boiling, deep or shallow frying, Sautéing, simmering, stir-frying and more. Searing is a technique used in grilling, baking, braising, roasting, sautéing, etc., in which the surface of the food (usually meat, poultry or fish) is cooked at high temperature until a caramelized crust forms.

Each and every cuisine of the world has variety of cooking techniques. Where I grew up, Baghaar is a cooking technique used in Indian and Pakistan cuisine in which cooking oil is heated and spices are added to fry. The oil is then added to a dish for flavoring.
I use Browning – the process of partially cooking the surface of Panner or Tofu(Most people use to brown meat but being a vegetarian, I brown Paneer and tofu) to help remove excessive fat and to give the meat a brown color crust and flavor through various browning reactions.

I also use Tempering (spices) – a cooking technique and garnish used in the cuisines of India, Bangladesh, and Pakistan, in which whole spices (and sometimes also other ingredients such as minced ginger root or sugar) are fried briefly in oil or ghee to liberate essential oils from cells and thus enhance their flavours, before being poured, together with the oil, into a dish.So bascially the list could go almost infinite.
And cooking is not just limited to these techniques anymore….let’s look further!
The first innovation I would like to talk about is pressure cooking as it is one of my favorite. Pressure cooking saves me lot of time and help to retain nutritions. Pressure cooking is getting popular with new inventions and safety features. Pressure cooking is only a few hundred years old, and it only really became popular for home use in the last century. When I was a child, using first-generation pressure cookers was still considered a bit dangerous. They didn’t have all the built-in safety mechanisms of modern pressure cookers. I’ll never forget how I first learned about pressure cookers. I was about 10 years old only or I exactly don’t even remember, and I saw one explode. Daal(Lentil) on the ceiling! On the cabinets! almost all over the kitchen..what a mess! I got never discouraged though to use pressure cooker in my daily cooking. And now that time has changed, I am more confident than ever to use pressure cooker in my kitchen. But I am transitioning to electric pressure cooker as it has more safety features and fairly easy to use with more cooking options.

You can find so many recipes using pressure cooker on this blog and on my youtube channel.

The socond techinque I love is Solar Cooking. A solar cooker is a device which uses the energy of direct sunlight to heat, cook or pasteurise drink. Many solar cookers currently in use are relatively inexpensive, low-tech devices, although some are as powerful or as expensive as traditional stoves, and advanced, large-scale solar cookers can cook for hundreds of people. Because they use no fuel and cost nothing to operate, many nonprofit organizations are promoting their use worldwide in order to help reduce fuel costs (especially where monetary reciprocity is low) and air pollution, and to slow down the deforestation and desertification caused by gathering firewood for cooking. Solar cooking is a form of outdoor cooking and is often used in situations where minimal fuel consumption is important, or the danger of accidental fires is high, and the health and environmental consequences of alternatives are severe.

GoSun company makes the best Solar grill. And the company is constantly innovating new products. These days, I can almost pop anything into the GoSun Grill to bake, steam or boil.

The third one is known as Sous Vide cooking technique. And don’t under estimate the power of this technology. One of the company Nomiku has invented wi-fi Sous Vide device. Yes, wi-fi. Cook remotely now from anywhere. I am not sure if you have heard some people cooking in their dish washer. Yes, your dishwasher cycle is good enough to cook grains, lentils, vegetables and more. Be sure to learn safety first while using any cooking techinques. Sous-vide (/suːˈviːd/; French for “under vacuum”) is a method of cooking in which food is vacuum-sealed in a plastic pouch and then placed in a water bath or steam environment for longer than normal cooking times (usually 1 to 7 hours, up to 48 or more in some cases) at an accurately regulated temperature much lower than normally used for cooking (typically around 55 to 60 °C (131 to 140 °F) for meat, higher for vegetables). The intent is to cook the item evenly, ensuring that the inside is properly cooked without overcooking the outside, and to retain moisture.


I really love some other inventions that can make quick treats like Sandwich-waffle maker, Toaster and many othe portable inventions. These days, I can enjoy many fried items that I love without any guilt by using Babycakes Multi Treat Baker. The end result comes out just like fried food you have been craving for…

I am really thankful to some inventions as they make my life easier and allow me to feed my kids healthy treats.

Then comes slow cooking. A slow cooker, also known as a Crock-Pot (a trademark owned by Sunbeam Products but sometimes used generically in Australia, South Africa, Canada, New Zealand, the United Kingdom, and the United States), is a countertop electrical cooking appliance used to simmer at a lower temperature than other cooking methods, such as baking, boiling, and frying. This facilitates unattended cooking for many hours of dishes that would otherwise be boiled: pot roast, soups, stews, and other dishes (including beverages, desserts, and dips). A wide variety of dishes can be prepared in slow cookers, including ones typically made quickly, such as cocoa and bread.

Basic cookers, which have only high, medium, low, or keep warm settings, must be turned on and off manually. More advanced cookers have computerized timing devices that let a cook program the cooker to perform multiple operations (e.g., two hours high, followed by two hours low, followed by warm) and to delay the start of cooking.
Because food cooked in a slow cooker stays warm for a long time after it is switched off, people can use the slow cookers to take food elsewhere to eat without reheating. Some slow cookers have lids that seal to prevent their contents from spilling during transport. The low temperature of slow-cooking makes it almost impossible to burn even food that has been cooked too long; however, some meats and most vegetables become nearly tasteless or “raggy” if over-cooked. And slow cooker is not my kind so I haven’t got my hands on it yet.
Hope you enjoy this article and feel free to share with friends who may be interested in cooking for you!!!