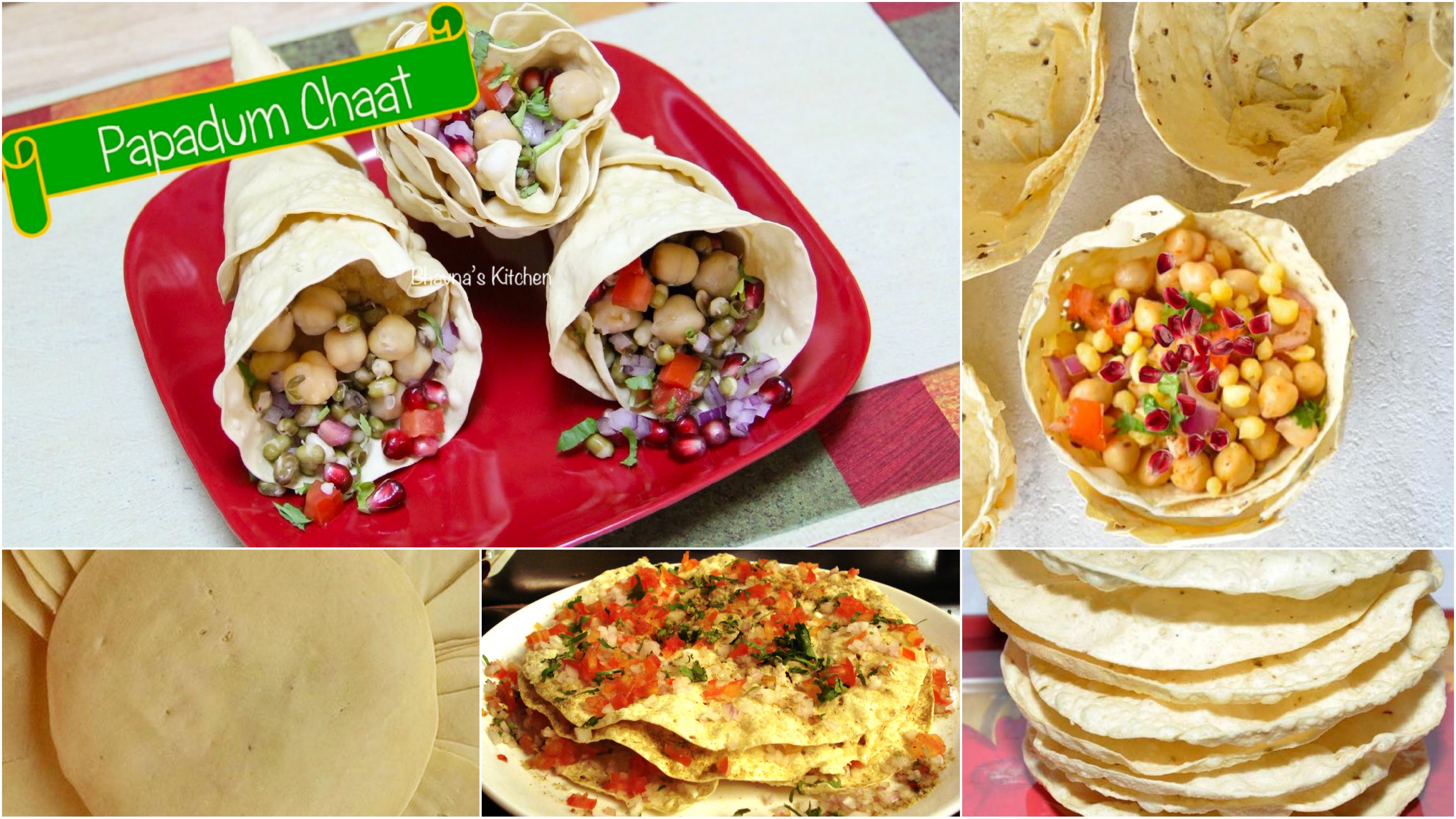 How many ways do you enjoy Papad?
Here is a plate of Papad for you. Papad is a thin, crisp disc-shaped Indian food typically based on a seasoned dough made from black gram (urad flour), fried or cooked with dry heat. Flours made from other sources such as lentils, chickpeas, rice, or potato, can be used. In South India it is called Papadum.

Below are some fancy way to use papad for appetizer or snacks. I love to shape papad in cone, bowl(known as Papad Katori or Tokri) and stuff with Indian chaat Ingredients like boiled chickpeas, onion, tomato, chaat masala, Coriander leaves with Besan sev.

Most restaurants in the USA, serve papad with chutney as soon as we sit on the table and my whole family love that moment, so I started making restaurnat style serving.

A papadum is a thin, crisp, disc-shaped food from the Indian subcontinent; typically based on a seasoned dough usually made from peeled black gram flour (urad flour), fried or cooked with dry heat. Flours made from other sources such as lentils, chickpeas, rice, tapioca, or potato can be used.

Papadums are typically served as an accompaniment to a meal in India, Bangladesh, Nepal, and Sri Lanka or as an appetizer or snack, sometimes with toppings such as chopped onions, chopped carrots, chutneys or other dips, and condiments. In Pakistan, these are made of rice and often used as a snack vs meal accompaniment. In certain parts of India, papadums which have been dried but not cooked are used in curries and vegetable dishes.

Papadums are mainly made in Rajasthan and Maharastra in the north. In the south, Kerala, Madurai district in Tamil Nadu, Kanchipuram, and Chennai are major pappad or appalam manufacturers.
Papadum recipes vary from region to region and from family to family. They are typically made from flour or paste derived from either lentils, chickpeas, black gram (urad flour), rice, or potato.

Salt and peanut oil are added to make a dough, which can be flavored with seasonings such as chili, cumin, garlic, or black pepper. Sometimes, baking soda or slaked lime is also added. The dough is shaped into a thin, round flatbread and then dried (traditionally in the sun), and can be cooked by deep frying, roasting over an open flame, toasting, or microwaving, depending on the desired texture.

There are different varieties of papadam like chickpeas, green grams, black grams, Potato, Rice, etc. Bikaner is the hub of chickpeas and green grams papadam manufacturing. Potato Papadam are made in Varanasi. Most sweets and snacks selling national companies are also involved into this business like Haldiram, Bikanerwala, Mishrambu, Lijjat, Shri Shyam Papad, etc.

In most curry houses in the United Kingdom and Australia, they are served as an appetiser with dips which often include mango chutney, lime pickle, onion chutney and raita.
Papadam can be prepared from different ingredients and methods. Arguably, the most popular recipe uses flour ground from hulled split black grams (urad dal). Black gram flour is mixed with black pepper, salt, and a small amount of vegetable oil and a food-grade alkalai, and the mixture is kneaded. A well-kneaded dough is then flattened into very thin rounds and then dried and stored for later preparation and consumption. Papadam may also contain rice, jackfruit, sabudana, etc., as main ingredients. Cracked black pepper, red chilli powder, asafoetida, or cumin or sesame seeds are often used as flavouring agents.

Don’t get me wrong but …
Read More