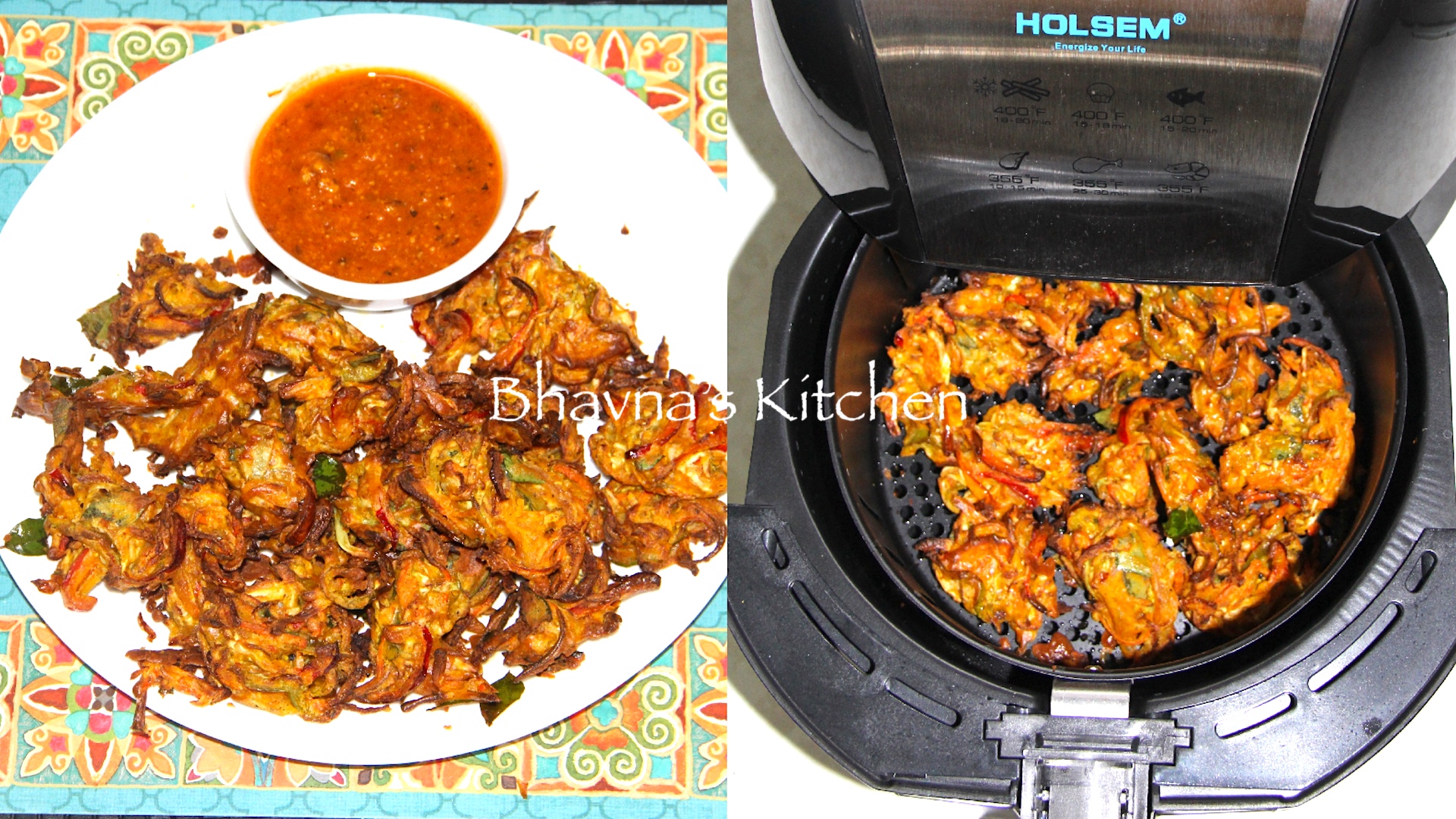 What do you use your air fryer for? Well, these days I use air fryer for all deep fried recipes that I have been eating since childhood but haven’t had in a long time due to my diet restrictions. I simply love fried food and specially adore fried snacks with chai(Indian spiced tea).
Today, I decided to use air fryer to make Pakore. These cirspy fritters are the usual demand of my family as evening snack or afternoon lunch with tea or coffee. It is a very common Indian snack and I have been eating this since childhood but have been avoided for long as I have cut down on fried food but thanks to air fryer, I can enjoy my favorite childhood snack again without guilt by using very little oil.
Below is the video instructions for making Pakore.

Pakora (pronounced [pəˈkoːɽaː]), also called pakoda, pakodi, or ponako, Bhajia or Bhajiya is a fried snack (fritter). Originally from India, it is found across the Indian subcontinent, especially in Pakistan, India, Bangladesh and Nepal.


Pakoras are popular across South Asia and Great Britain (particularly in Scotland). They are sometimes served in a yogurt-based gravy (curry), as a main dish pakora curry, rather than as a separate snack. In this case, the pakoras are generally doughier and are made from chopped potato, onion, and chili mixed into the batter, instead of individual fried vegetable slices.

Pakoras are also encountered in Afghan cuisine. In China and Nepal, they are called pakoda and pakauda, respectively. In Somalia, they are known as bajiye.

Pakoras are created by taking one or two ingredients, such as onion, eggplant, potato, spinach, plantain, paneer, cauliflower, tomato, or chili pepper. They are also occasionally prepared with bread, buckwheat, groundnut, fish, or chicken. They are dipped in a batter made from gram flour and then deep-fried. The most popular varieties include pyaaz pakora, made from onion, and aloo pakora, made from potato. Other variations include paalak pakora, made from spinach, and paneer pakora, made from paneer (soft cottage cheese). When onions, on their own, are prepared in the same way, they are known as onion bajji. A variation of pakora made from wheat flour, salt, and tiny bits of potato or onion (optional), is called noon bariya (nūn = salt) (Hindi: नूनबरिया), typically found in eastern Uttar Pradesh in India.

Pakoras are usually served as a snack or appetiser. In Great Britain, pakoras are popular as a fast food snack, available in Indian and Pakistani restaurants. They are also often served with chai to guests arriving to attend Indian wedding ceremonies, and are usually complemented with tamarind chutney, yoghurt sauce, brown sauce, or ketchup.
Below is the common recipe for making Pakore that I shared earlier. If you decide to air fry, watch the video above as the recipe below is for deep frying.

Don’t get me wrong but …
Read More